When you think of a casino, for most of us, the first two things that pop into our minds are poker and slot machines. Poker is such a widespread phenomenon that it forms part of many cultures throughout the world, from the Far East to the United States.

Having so many people around the globe enjoying this simple yet enthralling game, it comes as no surprise how many different variations of the game you can find out there. In fact, you can play hundreds of them! While Texas Hold’em is, without a doubt, the most popular one and the one most people play (popularized mainly through televised WSOP and WPT tournaments), that’s not where the fun stops! Right behind Texas, Omaha Hold’em sweeps the second place in popularity.

And then, when you go deeper into it, there are more variants of the Omaha game itself, with different rules being applied or ignored. One such subvariant is Omaha Hi-Lo, where you split the pot between two hands you evaluate differently. But, before we go thoroughly into the Hi-Lo, you ought to know about Omaha Hold’em basics. Let’s get to it!

Now, as you might already know, there are three basic types of poker. There’s draw poker, where you can discard some of the cards you have in your hand and replace them with other ones from the deck. You can also choose to play stud poker, which has players holding all their playing cards in their hands, some of which are facing up and some down. Finally, the most common type is community card poker game, where Texas and Omaha Hold’em belong. In it, you have hole cards which are for your eyes and your use only (you receive them facing down). Additionally, you have community cards, which the dealer places on the table facing up for every player’s use.

The biggest difference between Texas and Omaha poker is in how many hole cards you receive. As opposed to Texas’ two, in Omaha, each player gets four hole cards. The addition of just two cards means the amount of starting hands jumps from 169 to 16,000! Therefore, the relative value of hands changes. What does that mean?

The hand rankings don’t differ from Texas — Royal Flush is the strongest, while a High Card is the weakest hand. However, if you’ve played Texas before, you’ll know that most rounds end up with the player holding a Pair or Two Pairs being victorious. In Omaha, that’s rarely the case! Here, players will often have at least Three of a Kinds. Usually, they’ll end up with Straights and Flushes, so pushing with a Pair is not as firm of a bet as it is in Texas. 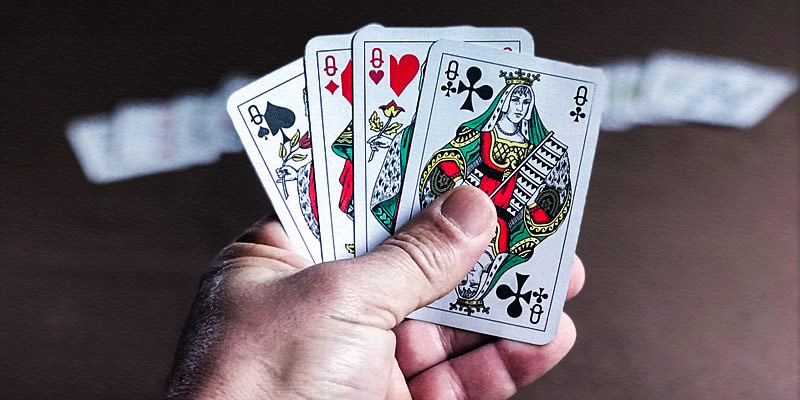 There’s another rule which doesn’t exist in Texas, and that’s which cards you can and cannot use while forming your best hand. The rule states that your five-card hand has to contain three cards from the board, while the other two have to be hole cards. This rule is a major stumbling block to most newcomers, especially due to the fact that they usually make the step after being fully accustomed to Texas. You should always have this rule in mind, because without it, you’ll often end up thinking you have a stronger (or weaker) hand than you actually do. Consequently, your hole cards have different starting values, meaning that in Texas, pocket Aces are great for pre-flop. But A-A-x-x in Omaha relies a lot on the other two cards.

Let’s play out an example round. You’re playing a round of Texas Hold’em and community cards are 2-2-2-Q-A. Your hole cards are A-5. Obviously, you’re rocking a Full House of 2-2-2-A-A. Now, with the same community cards above, in Omaha, you can have hole cards of A-5-7-3. Here, due to the hand-forming rule, the best thing you have is a Pair of Aces, which, as we’ve already said, is a rather weak hand in Omaha.

When you play enough games and learn to abide by this rule, it becomes a relatively simple game, just like Texas does. You can play it as both a pot-limit and no-limit game, with the former being a lot more regular variant. Now that we’ve got Omaha covered, let’s see what the “Hi-Lo” stands for!

As we’ve already said, Omaha Hi-Lo is a split pot game, which means that two hands win each round. One half goes to the highest hand, while the other goes to the lowest hand. The high end of the pot is regular Omaha, with regular hand rankings, so there’s nothing new there. The fun comes in the other half!

To enter the race for the low pot half, you need to have a qualifying low hand, which means that your highest card can be an eight (which is why players often call it Omaha 8 or Better). Your goal here, rather counterintuitively, is to get the weakest hand possible. Consequently, a High Card is your best bet.

When ranking the hand, don’t count Flushes or Straights against it, so the best outcome is to have a set that reads as follows: A-2-3-4-5, irrespective of the suit. You always value Ace as a low card. You rank your hand by the highest card you’re holding, which signifies that the above example is a 5-high. Subsequently, it’s not important what the other cards are. So 3-4-5-6-7 will win against A-2-3-4-8.

Furthermore, when evaluating your hand for both pot sides, the game doesn’t restrict you to using the same hole cards. After all, you’ve got four of them, and you can only use two! This translates into your being able to have a Pair of Queens on one end, and A-3 on the other, should community cards deem it possible. And unless you play Omaha with declare, which is a rare occasion in online poker, you don’t need to state beforehand which side of the pot is the one you’ll be gunning for.

In pot limit Omaha hi-lo poker, the goal is, ultimately, to scoop the pot — win both halves. If you’re strong only for one side of the pot, raising (or calling big raises) is not an advised move, as you’ll be allowed to claim only half of it. You should also be wary of the pre-flop. The general advice is to until the flop, to figure out whether there’s a potential for both halves.

Generally, in Omaha (as well as Hi-Lo), bluffing is rarely successful and you should steer away from it. This comes as a result of each playing having four hole cards and, thus, better odds of getting a strong hand. Furthermore, with a pot limit, they know you can’t make an insane raise, and you have to stick to a limit, so they are already aware how high of a risk they’re taking. Consequently, Omaha can be a far more active game than Texas, as players don’t shy away from calling others’ raises.

When you’re the one who’s calling someone else’s bet, you should be aware of what we call a “nut potential”! Omaha is a nut game, which signifies that usually, the highest variant of a hand ranking wins. In plain English, if you’re holding a Straight of 4-5-6-7-8, it’s likely someone will one-up you with a 5-6-7-8-9, so you need to work out your nut potential before betting.

If you’re making the switch to Omaha from Texas — which most likely you are — you should go easy at first and play practice games. Until you get a hold of the game fully, don’t chip in with real money, as you’ll feel really frustrated when the “two hole cards are a must” rule comes calling! Additionally, with Omaha Hi-Lo, you need to get accustomed to the fact that you need to judge your hand in two different ways.

Once you become good at this game, it’ll be easier to make some profit. There are fewer players playing the game, which means it’s easier to be better than the competition. Additionally, it’s an action-packed variant where players don’t fold as much. Playing your hand the right way can get you a lot of chips in each pot. Good luck!