Poker is one of the favourite games of gambling lovers. But to become proficient at it, you need to be dedicated and experienced. Here, we go through the basic rules of poker and what strategies you can implement to start winning your games with ease.

Play to Win: Rules and Strategies of Poker

What’s the first game you think of when someone mentions gambling? Chances are, it’s poker. Poker probably represents the most popular casino game out there. But there’s a general misconception that poker is a game of chance. It’s not.

Unlike slots, which is basically just hitting the same button endlessly, the main thing that separates professional poker players from amateurs is not luck — It’s having strategy and skill. Most of the new players come in with no idea what they should be doing, and they soon give up dissatisfied. Here, we’ll explain how to create your game plan, which will help you become one of the pros.

Before you join a poker table (real or a virtual one), you should learn what cards go together and how valuable they are. Most of the options are self-explanatory, but people get confused with which hand beats which. Hence, we’ll begin by listing all the possibilities in order (1 being the weakest hand, 10 being the strongest one):

If you wish to thrive at poker, you should know all these combinations by heart. In the beginning, we advise you to have a copy of this next to you, so you always know what hand you have. And more importantly, what your opponents might have. For example, you may feel quite confident if you have two pairs of Aces and Kings. You start raising your bets, only to be made a fool of by three Twos.

Lastly, if two players have combinations of the same rank, the one with higher card values wins. Three Eights will win against three Fours.

Think of a poker game. You’ve probably imagined Texas Hold ‘Em poker, which is the most universal version of poker. The appeal of Texas Hold ‘Em is that it doesn’t impose any bet limitations. You can give up before you even start playing a hand. Likewise, you can go all in and invest all your money at once. This provides room for developing strategies, but before we go there, let’s go over how a game of poker develops.

Every player gets two cards, which is their starting hand, and only they have access to them. They are called hole cards. After that, a dealer draws five cards on the table, which we call community cards. You use these to combine with the cards in your hand. Furthermore, the dealer’s card draw happens in three sequences:

There are four turns during which players place their bets, starting with when you receive your cards and ending after the river. The game starts with a player sitting to the left of the dealer and continues clockwise. The dealer’s position changes after every game.

At each of these turns, your possible moves are either to check, call, raise, or fold. Check means that essentially nothing happens — you don’t make changes to the money pot. If you raise, you up the stakes and make the hand worth more. Then, the other players need to decide whether they’ll call your offer (match it) or fold (turn in the cards and abandon the pot). They can also re-raise, starting another betting circle.

At times, poker games have blinds. Gamemasters have made this addition to try and avoid dull games where everyone just folds at the beginning. The first two players whose turn is to play at the beginning have to chip in a small and a big blind. It’s called ‘blinds’ because you have to wager money before seeing your cards. After that, other players are free to call the blind, fold, or raise.

Apart from Texas Hold ‘Em, you can also play a few other poker variants. We’ll briefly go through some of the popular ones.

Now that you’ve learned the ropes of poker, it’s time to focus on your strategy. As we’ve mentioned earlier, this is not a game of chance. Sure, you need luck to draw good cards, but at the end of the day, it’s about skill. Like with everything else in life, to be the best at something, you need talent. And taking into account that you’re reading this, we consider you a betting man. What odds would you give yourself on becoming the next Johnny Moss? Well, don’t despair. Anyone can develop enough skill to make themselves good at something, up to a level.

However, before you even start playing, you should be ready to remove the emotion out of it. You can easily look like a dummy if you fall for a bluff. When flustered, we tend to make rash decisions, which, in turn, force us to make mistakes. Poker’s about fun, not stressing out.

Professional players usually have a basic strategy of their own, which they then adjust to behavioural patterns of other players. This will be difficult at the start because beginners don’t really know what they are doing. Hence, they don’t have a pattern for you to figure out. This is why you should try to play against better players and study their moves.

Moreover, you also need to learn to let your loved ones go. Meaning that if you have a strong hand (let’s say three aces), carefully study the community cards. You can lose a lot of money to someone with a flush, just because you were too fond of your hand.

Lastly, don’t give up. Even the best players have poor sessions where they always seem to be on the losing side. After all, the key to becoming a good poker player is consistency and experience. Keep going, and the results will follow. 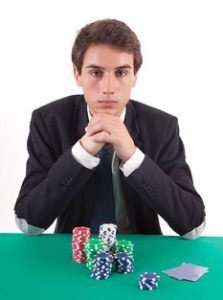 To some, bluffing is the most exciting thing you can do while playing poker. Playing online only makes it easier because body language is not involved. When you bluff, what you’re basically doing is trying to force a player with a better hand to fold. So to bluff successfully, you need to think about how you play games when you have a great hand. If you diverge too much, they’ll call your bluff, and you’ll lose your money.

Moreover, you must also make the bluff look credible. If your opponent is holding a full house in their hands, they’re going to take a guess what you might have according to the community cards. What are the chances you’re holding a royal flush?

Mathematics play their part in poker. But it sounds worse than it is. With time, your brain will automatically learn how to count the odds and whether opponents’ bets are worthy of a call or not. For example, if you’re waiting for the river to flush out a suit of hearts, the probability of that happening is 25%. If the opponent raises the pot by double, it’s irrational to call the bet. That is unless you’re reading their bluff.

Most pro players take leadership of the game between turns. If you’re confident in your hand, you want to try and make the pot as big as possible. But raise too much, and nobody will follow you. With experience, you’ll know what are the limits you can go to and still have the players call your bet. This is especially easy if you’re playing against newcomers, as they tend to call anything without much thinking.

In the end, you should always remind yourself that you need experience and skill to master poker. Be relentless and stick to your strategy. Making inconsistent decisions is a trait of a poor player, and you should work on avoiding it. Follow the advice we’ve given you, and in time, you’ll be able to participate in tournaments with huge rewards and come out as a winner.