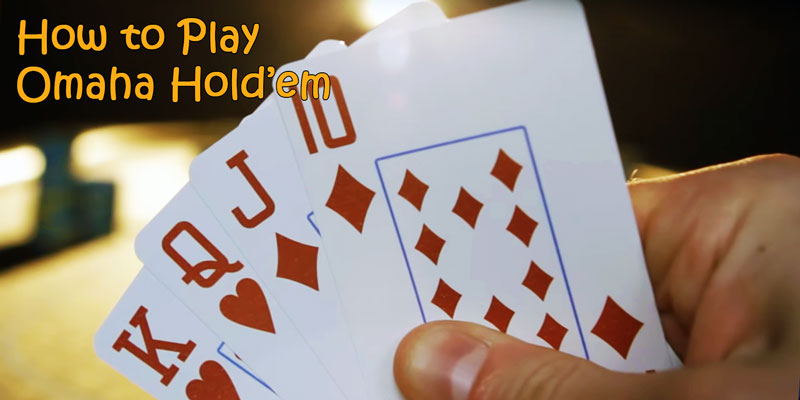 Hold’em card games are poker forms with slight twists in the rules compared to basic poker. While common draw poker was popular way back during the 1800s, hold’em versions are newer, but they’ve changed the poker world quite a bit.

The most popular type is Texas Hold’em, however, the runner-up is undoubtedly Omaha Hold’em. These two games are played worldwide in tournaments like WSOP and are available in most land-based casinos and online poker rooms.

But before exploring the rules, hierarchy, and bets in Omaha Hold’em, we must note that U.S. casinos use the “Omaha” term for many different poker games.

So let’s dig in and show you how to play Omaha Hold’em!

Omaha Hold’em poker will always use a deck with 52 cards. This is a standard deck. The variant will also include pre-flop, flop, turn, and river rounds.

Every player is dealt exactly four cards. Then, two will have to get discarded. There are five shared cards — community cards. What’s more, each player must utilize three of the shared cards. And they need to be used with two playing cards that are in their hand (out of 4). The objective is quite clear — get a high hand that beats all others!

The fact that the people at the table will obtain precisely four cards is the main difference between Omaha and Texas games.

Additionally, this poker type accepts from two to ten players.

First, participants must draw playing cards to establish which person will deal. Then, the person who receives a high card which outranks all the others’ will be the round’s dealer. If there’s a tie, the suit rank will determine the winner. The suit rankings are identical to standard poker, with Spades being the highest and Clubs the lowest. The player who deals also gets the disc-like “dealer button,” and it will indicate their position.

Following these wagers, the small blind player will be entitled to getting their playing cards first. After that, participants will get their cards from the dealer (one by one, clockwise). They will be face-down (hole) until each player receives them.

The first round, aka, the pre-flop will conclude when all participants make their choices. Omaha follows typical actions such as fold, call, and raise. Calls need to contain the same wager size as the large blind.

After everyone acts and each player calls or folds, the game will move to the flop.

The dealer will reveal 3 out of 5 community cards in this round. The last card at the top of the poker deck will be discarded before the dealing, though. Players call this the “burn” card.

The community cards will be shown face up in the center of the poker table.

The betting round follows the same actions, and the one to start it is the first player from the dealer’s left. The minimum wager size in the flop is usually the same as the big blind.

When the one with the dealer button reveals the 4th shared card, the next wagering round starts. It’s identical to the previous round. However, there is an increase in the bet limit. Usually, the minimum raise in this round is 2x the big blind.

After the bets in the turn, the players will proceed to the river. In this stage, the final shared card will be revealed. The betting actions are the same as in the previous round.

When the showdown begins, all the players remaining have to reveal their hands. The one with the strongest five-card poker hand is the winner of the Omaha game.

Omaha’s hand rankings are identical to the standard poker games. The royal flush counts for the strongest hand in Omaha. Furthermore, you can also win if all other participants fold. And the winner’s prize is the loot from the whole pot.

But, at the game’s end, the button for the dealer moves to the left side. Then, the blinds are put up again.

Those were the basics of the poker type known as Omaha Hold’em. Of course, pot-limit Omaha, fixed limit, Omaha Hi-Lo, and no-limit game variants will have slight alterations in the rules. But overall, it’s quite a fun game. It will surely keep players alert! The betting structure is quite unique, and when the four cards are dealt, you don’t have to play with all of them. Omaha players love this poker variation for its simplicity. So check out Omaha Hold’em in a live or online casino and good luck!