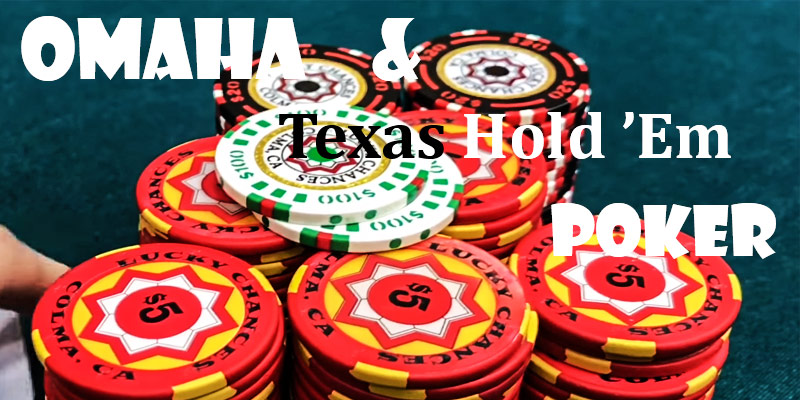 Provided you’ve ever played poker, chances are that it was Texas Hold ’Em. After all, it represents the most common and the most popular variant of poker, and all the televised tournaments and shows like WSOP and High Stakes Poker revolve around Hold ’Em.

Concerning other poker variants, Omaha places second in frequency and popularity. This is mostly so due to its similarity to the standard game of Texas Hold’Em. They have the same betting system —  you have four different betting streets (preflop, flop, turn, and river). Additionally, the hand rankings are the same, so the Royal Flush comes as the strongest hand one can have, while the weakest is a one-card High Card hand. But, we’ve come here to see what the difference is. Let’s get into it.

Both of these variants are community card poker. Here, every player gets his own set of hole cards which are face down. There are also community cards, which the dealer places on the table facing up, as the players make five-card hand combinations between hole and community cards.

The major and the most important distinction between Hold’Em and Omaha is that they don’t give you the same number of hole cards. Namely, in regular Hold’Em, you’re handed two, while in Omaha you get four cards. This difference is essential to the game. With four hole ones, you effectively have nine cards to make combinations with, compared to seven in Texas.

However, there’s an added difficulty. When you’re forming your hand, in Hold’Em, you can use any combination of your hole cards — both, one, none! In Omaha, contrarily, you have to use two hole cards when getting a hand. This is not debatable — not one, not three, it must be two. One of the major pitfalls that novice Omaha players fall into is thinking they have a strong hand when they actually don’t. For example, if you’re holding a Ten of Hearts, and the other three are of any different sign, you won’t have a Flush, even if all community cards are a suit of Hearts. Let’s give an example. 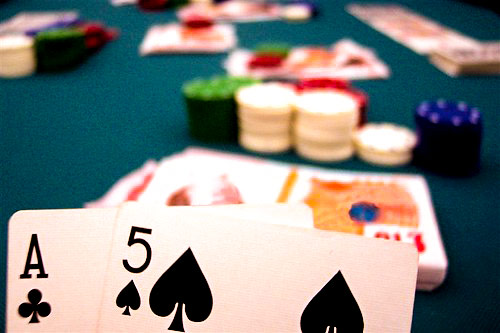 Let’s say that community cards are Four, Six, Nine, Queen, all of Clubs, and a Three of Hearts. In Hold’Em, you have Ace of Clubs and King of Diamonds. With the same community and two hole cards, in Omaha, you have additional King of Spades and an Eight of Spades. In this scenario, you have a club Flush in Hold’Em. However, in Omaha, since you only have one heart card, your strongest combination is a pair of Kings, which is realistically a weaker hand in Omaha.

With this, there are different ways you should approach a hand. For instance, if you get pocket aces (AA) in Texas, that’s a strong preflop combination, with which you can be aggressive. However, in Omaha, getting two aces is not as valuable. Your AAxx hand will largely depend on the other two cards. If you get two ragged ones (meaning that they don’t combine in value or suit with your aces), you should know you don’t have as strong a standing as you would in Texas.

As we’ve mentioned before, the ranking of the combinations is the same — Flush will always beat a Straight, but will always lose to a Full House, etc. However, the relative strength of those hands is different in reality. What does that mean, we hear you ask.

If you’ve played Texas Hold’Em for a while, then you’ve noticed that, in the majority of rounds,  Pairs or Two-Pairs are the ones that take the pot. As a result, it’s normal to chase the pot if you have two pairs, as this would, statistically, more often than not result in a win. In Omaha, the story’s different.

As you have more cards at your disposal, it’s easier to combine a strong hand. So if you end up with Two Pairs, it’s far more likely that someone at the table is bargaining with something stronger — a Straight or a Full House.

Furthermore, when you get a Flush, the occurrences in which someone else also has a Flush but with higher-value cards are rare enough for you to neglect that possibility. In Omaha, it’s quite the opposite.

Omaha is what poker players call a nut game. This means that you should bet strongly only if you have the highest possible combination. For instance, if you’re holding a 4-5-6-7-8 straight, it’s likely that one of your opponents will be rocking a straight of 5-6-7-8-9, which beats your combination. 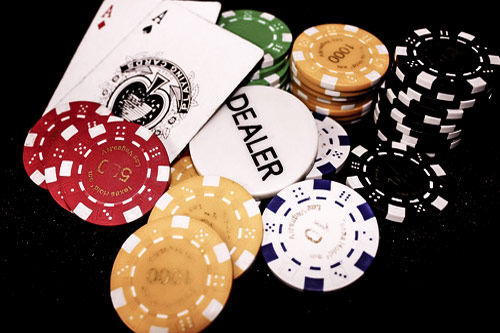 Although it’s possible to find a no-limit Omaha game, it’s usually played as a pot-limit variant, as opposed to Texas’ no-limit structure. One of the reasons why regular Hold’Em is so popular is because of the unpredictability and excitement which comes with no-limit betting. At any time, someone can go all-in and bring another whole level of risk and tension to the round.

With pot-limit Omaha, you don’t have the luxury of being that aggressive and forcing your opponents to fold. But there’s a positive as well. Since there are more cards to play with, players often end up with what they perceive to be a strong hand. Consequently, they are more likely to call your bets as they will often have at least three of a kind.

Pot-limit also helps you to be more courageous with your betting. For instance, in no-limit Hold’Em, you can raise, but you have to be wary. The player next to you can start thinking they’re Tom Dwan and re-raise for an insane amount, which can make you wave goodbye to your raise. With a pot limit, if you place a max raise, you know for a fact that nobody will re-raise you, which will let you play with your pot at least until the next betting street.

When it comes to the speed with which the game progresses, people usually feel that Omaha is a faster variant. But even if it is so, this is neglectable, as both poker variants are fast-paced games, especially compared to other common variants such as draw poker or Seven-Card Stud.

The comparison of the complexity of these two games can be shown by one of those nerdy charts where two lines don’t start off the same but meet at one point, and then the weaker one overtakes. There’s a saying that poker is a game that’s easy to learn, but hard to master. That is true.

Since there are specific rules in Omaha that don’t exist in Hold’Em, Omaha is more difficult for beginners. When you’re starting off, you’ll make common mistakes of misreading your hands due to the “two hole cards” rule. On top of that, you have more cards at your disposal, which is difficult to keep track of when you’re a newcomer to poker. Even if you’re an experienced Hold’Em player, there will be times when you won’t see that you have a good hand or will believe that you have something you don’t.

However, once you grasp the idea of Omaha, the game becomes easier than Hold’Em. When you move on from learning how to combine hands, Omaha has less space for maneuvering. There’s no room for developing as complex betting strategies as in Texas because there are betting limits. Also, most players will have at least a relatively strong hand and are more willing to call, so bluffing is rarely an option.

As Texas Hold’Em is much more popular than Omaha, the standard of play is higher. It’s more difficult to join a Hold’Em tournament and win big than winning in an Omaha tournament. Since the number of players is higher, there’s more learning material, and you face more competition. Consequently, it’s fair to say that an average Texas player is more skillful than an average Omaha player.

So if your aim is to win money, your odds of doing so are better while playing Omaha, as you will have less opposition to worry about. Just beware of the rules which make this variant a bit more complex. The game philosophy between these two is the same, but you need to be aware of which combinations are valuable and what cards you can/have to use.